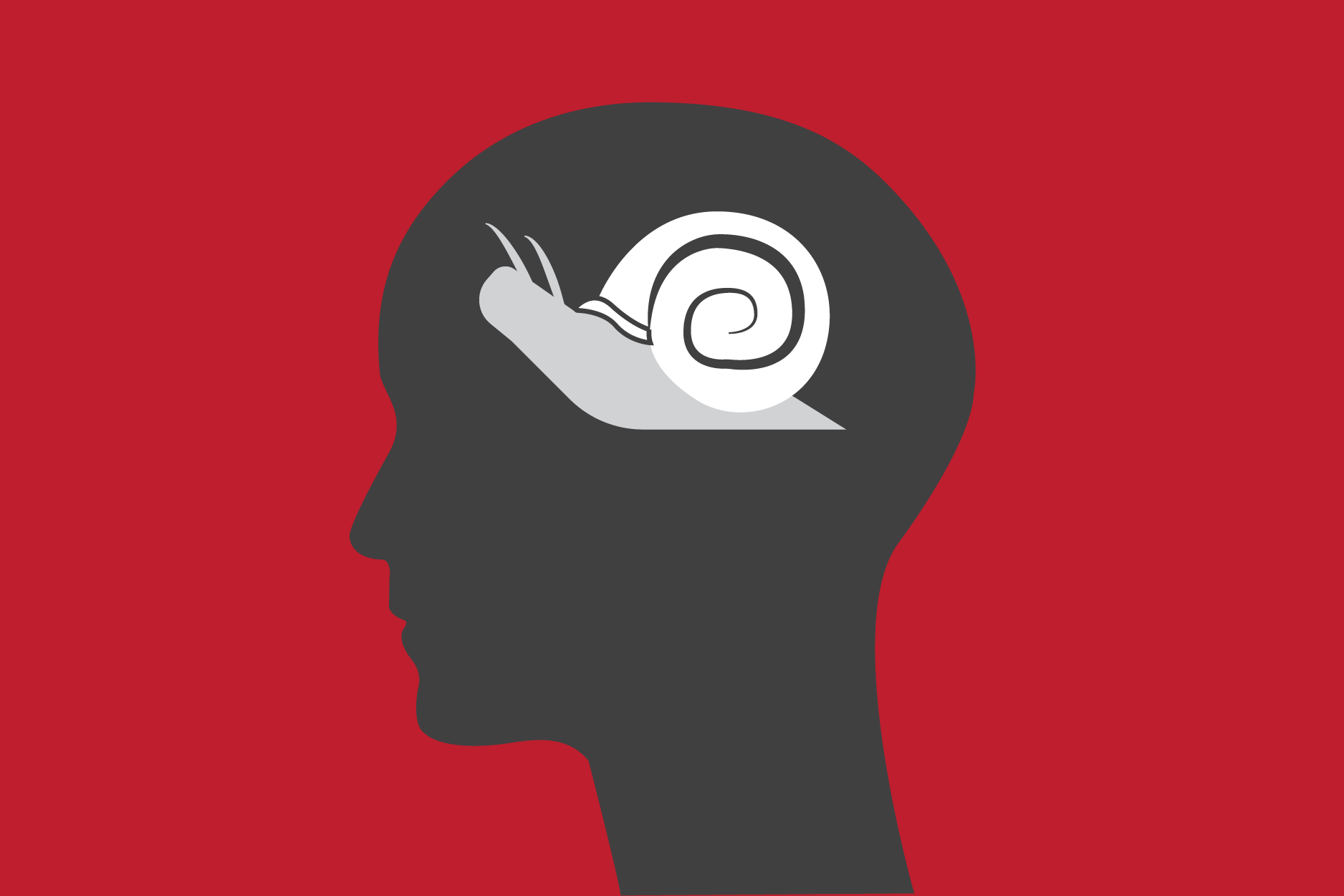 It’s a fascinating read, but it’s missing one key thing: action items on how to beat your laziness.

Let’s fix that, shall we?  Here are ten (I’m sure there are more) reasons that you’re being lazy or procrastinating, and how to fix it.

1. Lacking a sense of self-efficacy.

Self-efficacy is the conviction that if we put our mind to something, we’ll be effective with it. Without adequate self-confidence, however, we may not believe we’re capable of doing something successfully, so we end up not attempting it.

We all want to be successful at whatever it is we’re doing.  Unlearning fear of failure is a useful life skill all it’s own.  For the purposes of this article, we’ll talk about building a sense of self-efficacy on a more focused level.

Let’s say you want to start a blog.  There are a lot of places for you to doubt your ability to do it effectively:

These each seem like little, inconsequential fears, but cumulatively they can be paralyzing, even if you don’t feel particularly anxious.

The idea of seemingly small things adding up and, unbeknownst to you, taking up a lot of cognitive load plays a central role in my productivity philosophy.

The best thing to do in this situation, like so many others involving procrastination, is to put on some blinders and focus on one small bite at a time.

Set your goals in really small increments.  Don’t set your bar at “write an article,” just resolve to write one paragraph.  When you’re able to successfully conquer one subtasks, you’ll build confidence – and see yourself as most effective.

Plus, starting is always the hardest part, and once you complete your small, confidence-building task, you’re certain to soldier on.

As adults, we should be beyond needing “attaboys!” or “attagirls!” to stay resolved to complete a task. But many of us still depend on others for the motivation–or inspiration–to do what, technically, we should be able to do independently (without being “cheered on” by others).

In my experience, it does me little good to think about “should.” In fact, the guilt I feel when I’m judging myself and thinking about how I should be working on this or that just seems to drain cognitive load with nothing to show for it.

So if you need “attagirls” or “attaboys” to stay on top of your shit, go get ’em.  Post a screenshot of your finished to-do list.  Tell your friends about what you intend on doing that day, and then tell them again when you finish it.

The external emotional “support” needn’t be positive; you can follow this tip from another post and encourage your friends to shame you if you don’t finish a task.

When we apply ourselves to something, it’s usually done with some expectation of reward–whether material or emotional, internal or external…If in the past, our application and diligence hadn’t gotten us the positive feedback we craved, then how realistic is it to think we could yet maintain such diligence going forward?

This one is tough to give a tip for, since it involves unlearning an idea that you’ve learned over several years.  But this blog is about incremental improvements, so here’s your first increment:

Focus on the kinds of rewards you can give yourself immediately–material rewards.

Sometimes if I’m having a hard time getting to work on something, I’ll promise myself a beer after completing a task.  This helps train my brain to associate getting stuff done with a reward.  You may have also seen this gummy bear trick for studying: 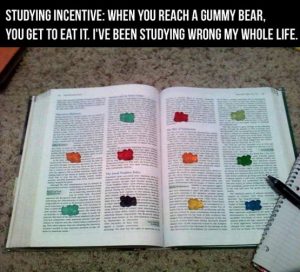 In my experience, people who lack self-discipline also lack fundamental self-esteem. And here the latter deficiency seems to feed directly into the former. That is, significant defects in our self-image undermine our confidence in our abilities, and this lack of self-confidence negatively affects the development of self-discipline–which of course is necessary to accomplish just those things that would enhance our self-esteem. Psychologically speaking, this has got to be one of the most vicious of vicious cycles.

Having low self-esteem doesn’t always manifest as being socially awkward or shy.  Self esteem can have many facets, and here we’re talking about a confidence that you can get the job done.

This is another point that doesn’t have an easy solution–building self-esteem takes years.

What I can offer is a practice from The Magic of Thinking Big.  Write a commercial for yourself:

Don’t worry, you don’t have to read it to anyone but yourself, or actually read it out loud. The book recommends repeating this commercial to yourself once a day, but that feels a little psychotic.  Just writing it once and having it somewhere to look back on occasionally has helped me a lot.

We have a tendency to shortchange ourselves (you’d probably be an asshole if you never did), and the book’s theory is that repeatedly practicing this shortchanging has a negative effect on our self-esteem.  Practicing self-aggrandizing once in a while can help you build self-esteem and your confidence in your ability to get the job done.  Just don’t do it in public.

5. Lacking interest in the endeavor itself.

When we denigrate someone as lazy, frequently what we’re really referring to is a task that the person finds so dull or boring that they just can’t get themselves to tackle it…what motivates some people won’t motivate others; and in neither case does doing, or not doing, something say anything about a person’s “laziness.” After all, what might be a task for one person might be an absolute delight for another.

No matter what tricks you’re pulling on yourself, it would be hard to get excited if your boss told you to draw circles on a piece of paper all day.  Sometimes what we need is not increased motivation, but a different task.

This isn’t helpful when it comes to tasks at work, where you usually have to do a number of boring things, but if you’re not feeling motivated about a personal project, take a step back and see if that project really interests you enough to dedicate your time and energy to it.  I like Derek Sivers’ ” ‘HELL YEAH’ or ‘No’ ” policy.

6. Ambivalence–or lacking faith that the action will be worth the effort.

We may not be convinced that the action we’re considering–or that’s been suggested to us–will be all that useful, or valuable, or satisfying to us. And so we’re unable to commit to performing it. Without the belief that a particular act or enterprise will somehow improve the quality of our life, it’s hard (if not impossible) to cultivate the initiative necessary for undertaking it.

To a certain extent, humans are lazy by nature.  It doesn’t make evolutionary sense to expend a lot of energy unless there’s a reward to be expected.  What this problem calls for is a shift of perspective–rethink what the “reward” of a given activity is.

Sure, if you start a business it may flop and fail to provide you with money or recognition, but the process will leave you with more experience–and the knowledge that you followed through on something.

“Don’t do it to get it done, do it to be the kind of person who gets it done”

If you’re on this blog, it’s because you want to better yourself.  Any–and I mean any–task you are able to convince yourself to do when you don’t want to, is worth doing. Because:

“Doing just a little bit during the time we have available puts you that much further ahead than if you took no action at all.”

It might not seem like a big deal if you’re able to spur yourself into action to get down to the gym on any given day, or write in a journal.  But over time, those moments of action will change you.

…whereas an inadequate sense of self-efficacy reduces our motivation because we don’t believe we can complete something successfully, the fear of failure focuses much more on our lacking the emotional resources to cope with the possibly negative outcome of our efforts…if our self-esteem is so tenuous, so weak, so vulnerable that the very risk of failing easily trumps any other consideration, we’ll be stymied.

While a lack of a sense of self-efficacy–not having confidence that you’ll be able to do something well (Reason # 1) sounds a lot like a fear of failure, what this point is talking about is the fear of the consequences of failure.

Not “I’m afraid I won’t be able to do this,” but “I’m afraid that, when people find out I can’t do this, they will think less of me.”

Dr. Seltzer’s focuses on “the emotional resources to cope with the possibly negative outcome.” This suggests that the way to solve this is to build resilience.

Many entrepreneurs and self-improvement figures (including Tim Ferris, who I mention on this blog often) talk about the Ancient Greek philosophy of stoicism.

Ferris’ post is worth a read, but stoicism is basically the idea of understanding that all things are ultimately small and temporary.  It’s a system for shrugging off the slings and arrows of life.

If you fear what people will think of you, if you fail, the stoic response would be to realize that

DSM-IV (the mental health practitioner’s diagnostic bible) actually defines depression as characterized by a “markedly diminished interest or pleasure in all, or almost all, activities.” And so, whether the activity be work- or pleasure-related, the overwhelming impulse is to avoid it. In such a state, merely getting out of bed in the morning can feel like an almost insurmountable task.

There’s a common misconception that the characteristics of depression are an overwhelming sadness and suicidal tendencies.  The clinical definition above is actually much broader.  The story of a person who is lazy, but discovers that they were actually depressed and have a huge life improvement after beginning therapy and/or medication, is not uncommon.

10. An attitude of pessimism, cynicism, hostility or bitterness.

One final reason for explaining our lack of motivation to apply ourselves to some task or project has to do with our becoming so jaded that we view our efforts as benefiting only others rather than ourself…This I’d refer to as rebellion masquerading as “laziness”–a kind of “Hell, no! I don’t want to do it, and I’m not going to do it!” Underlying this self-restraining orientation is un-discharged anger (or rage) from past disappointments…

There are a lot of reasons to become jaded in the world today.  Wage gaps are at all-time highs, the will of the people seems to have little effect on the actions of government, and success seems ever more uncertain in an increasingly competitive and constantly changing economy.

You have two choices: lay down and take it, or rise above.  If you fail at rising above, you’ll end up where you would have been if you’d laid down and taken it.  If your cause of laziness/procrastinatin is resentment, redirect that anger.  The best revenge is living well.