This morning I made a to-do list, but in the 5 hours since then I haven’t touched a single thing on it.  Self loathing has been accumulating all day. About 5 minutes ago I pounded a half can of Monster and here I am, writing.

Using caffeine for productivity seems like an obvious tip, but for people like me – who are not naturally inclined to work – sometimes caffeine just ends up providing a nice buzz while I procrastinate.

The key here is that I had accumulated enough angst about being a lazy piece of shit, that addition of caffeine was able to catalyze that fuel into productivity.  I call it the critical mass of sitting on your ass.

The Office writer and actor BJ Novak talks about something similar on the Tim Ferris podcast.  Ferris calls the combination of self-loathing and caffeine “a hell of  a thing” and has a cool name for it.  This post is about that and other strategies for productivity that work for me, and if you’re also foot-dragging slob, hopefully they’ll work for you too.

Instagram CEO Kevin Cystrom knows that once you start, you will probably finish.  So when he doesn’t feel like doing something, he commits to working on it for just 5 minutes because, as he puts it, “After five minutes, you’ll end up doing the whole thing.”

This works, and psychologists know why.

For those of us who procrastinate due to anxiety or fear of failure, reserving your right to withdraw from the activity “might increase the feeling of being in control” according to Julia Moeller, a postdoctoral research associate at the Yale Center for Emotional Intelligence

For those of us who simply dread work or resent doing something that we have to do, setting your own limit on how long you will work on it also gives you more of a sense of autonomy, rather than feeling forced.

Another time-related productivity tip is using the Pomodoro Technique.

3. Put Your Money Where Your Mouth Is

I have used tip #2 to great effect, but sometimes you really don’t have the motivation to even get started.  A very popular option is to get an accountability partner, but this requires that you have a goal-driven friend and that person needs to be dedicated enough to follow-through on both their own goals and checking on you.  Plus, it’s a long term commitment and that can be overwhelming.

So I wanted the benefits of an accountability partner, but not the commitment.  As with dating, money helps.

Pick any one of your friends, and tell them about a goal you are trying to accomplish by X date.  If you do not complete this task, you will owe them Y dollars.

This way, the other party has incentive to check on you for this particular task, but doesn’t have to get their own work and goals involved long term.

You’ll find that you will be a lot more motivated to start that website you’ve been talking about if you have to give Steve $20 if you don’t make some progress on it by next Friday.

Of course, you could always refuse to pay him, but do you wanna be that guy?

It helps if this friend is kind of broke, so that they’ll really get on you if you fail.

For us slackers, without an innate sense of drive, we often have to pull in external help like in tip #3 to get shit done.  This external help needn’t be a person.  Each of these following plugins can help you catch yourself when you’re about to wander off onto some pointlessly distracting website instead of working towards your goal.

My personal favorite of these is StayFocusd for Chrome.  It allows you to set a timer that counts down when you are on any of a list websites that you enter.  When your time is up, it blocks those sites.  I keep my reddit + facebook usage to <1 hour a day using this plugin.

I also like it because it shames you if you try to give yourself more time:

Another popular one is Momentum, which sets your new tab page to a nice landscape photo and displays a goal that you set each day.  This way, when you open a new tab to search for something that will inevitably lead you into a multi-hour Wikipedia hole, you’ll be reminded of what you wanted to accomplish that day.  For me it was too easy to get used to the new tab and ignore it, but if all you need is a little nudge it’s a great option. 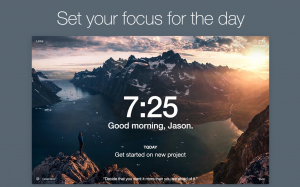 OverTask is another new tab replacement, but with a ton more features.  It essentially turns your new tabs into task management software.  You can add tags and notes to your tasks, and schedule tasks for the following day or later in the week. 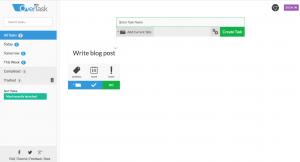 The real magic happens when you click “Do” on any one of your tasks. It saves all of your current tabs and closes them, and starts a new session associated with the current task.  In this example I’ve opened some tabs while on the task “Write a blog post.” If I click the back button, it will save these tabs until I’m ready to come back to this task, and re-open my original session. 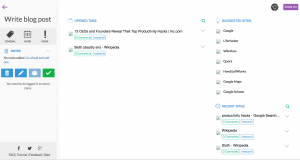 OverTask is especially helpful if you have several, long-term projects that you need to partition websites for (like tutorials and research).  It is kind of complicated, and is in beta so it’s a bit buggy as well.

5. Appeal to Your Vanity

A lot of slackers are very intelligent.  Odds are, the following describes you:

You probably grew up a high-achiever without putting in much effort, and that probably inflated your ego a bit.  One of my heroes, Anthony Bourdain, said that his big ego helped save him from heroin addiction.  Maybe yours can save you from mediocrity.

“I looked in the mirror, and I was very unhappy, and embarrassed by the guy I saw there. And I think that’s what provided me with the will to kick narcotics, because I was too fucking vain to be that guy anymore. That whining, desperate, sick, fucking victim.”1http://www.mensjournal.com/magazine/anthony-bourdains-life-advice-20140919